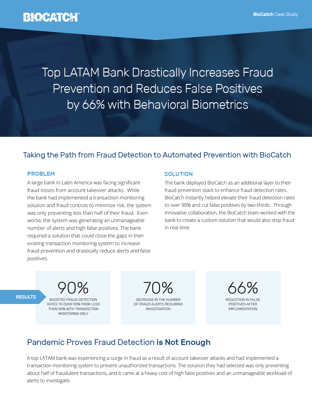 A large bank in Latin America was facing significant fraud losses from account takeover attacks. While the bank had implemented a transaction monitoring solution and fraud controls to minimize risk, the system was only preventing less than half of their fraud.

Even worse, the system was generating an unmanageable number of alerts and high false positives. The bank deployed BioCatch to their fraud prevention stack and instantly helped elevate their fraud detection rates to over 90% and cut false positives by two-thirds.